My journey to Canada demands that I should leave behind and abandon completely where I came from and start a new life...an independent life, free from the hang ups of yesterdays.

My province of Bohol is a beautiful place and my hometown is blessed with rich heritage and history; the only town that produces a Philippine president (The late Carlos P. Garcia) and an Archbishop (His Excellency Bernardito Auza) who is currently a Vatican Envoy assigned as Permanent Observer to the United Nations in New York. They both, in fact, are relatives on my mother's side. It's a royalty for Boholanos.
Boholanos are peace loving people and deeply religious. The strong family ties are evident where family bonds often displayed at both stages of a Boholanos family life. Bohol is home to many natural beauties; beautiful beaches, old churches, the Chocolate Hills that turned brown on summer months, the home of Tarsiers (Smallest monkeys in the world), caves and many other natural bounties.

In 2013, when Bohol was ravaged by a strong earthquake, Boholanos turned on their faith and took every destruction to the eye with gentle resolved and strength. With high hopes and positive nature, Boholanos beat that natural calamity with fueled hope for the future.

But Bohol is not a perfect place to live. There are still many opportunities and needs that requires improvements and honest leadership. Although I have been a tourist everytime I make a homecoming, I am very much in touch of my roots. I had been visiting tourists attractions everytime I came home which were not there in my younger years. I think it is true that where ever we are in the world, we need to look back and revisit our pasts. Bohol is where I was nurtured by a loving parents and so its progress and well being is absolutely still a part of my Advocacy.

In 2011, I organized and hosted our hometown fiesta celebrated yearly in North America and with it I raised enough money with the support of my fellow townmates. A quasi-church in my barrio benefitted from that proceeds as well as a cash donation to our town's Cathedral. In 2013, I organized a one day volunteer team to donate basic supplies to earthquake ravaged towns in coordination of the town's parish priests, donated one (1) artificial wheel for a remote area for clean drinking water. Donors also provided me with used clothes, medical supplies where we sent to Bohol as a form of helping. A school and alma mater also received donations from the concert I produced completing its roof and cemented the floor so schoolers won't get wet during activities and graduation ceremonies. This is also the alma mater of Archbishop Bernardito Auza where he graduated Valedictorian in 1973.
Why the long introduction to this request to vote the now candidate Leoncio Evasco Jr.? Because I want Boholanos to remember how passionate we should be in caring for Bohol despite living overseas and for Boholanos who must not miss a profound opportunity to take control of their future.

The May 2019 election in the Philippines is fast approaching and relentlessly gaining tractions for every candidate vying for the voters' attention. But let me draw attention for the governorship of Bohol where power, control and the opportunity to steer Bohol into a province of competitiveness, abundance and modernization.

Who is best to usher Bohol into an emerging power and abundance? I will not be called bias by those who have other candidate in mind as future Governor of Bohol because I only had one in mind; LEONCIO "JUN" EVASCO JR. Why is that?

Because I was given an opportunity to know him in 2017 when he visited and attended the Boholano gathering in North America held in Toronto. He was a guest and I had the opportunity to be up close to this man. I have a keen sense of observation and his demeanor told me his simplicity and down to earth nature. I arranged his meeting with the media, although brief. I was there when he called for a town meeting in Newcastle, a town east of Toronto. And then we joined him in his tour with Canada's Parliament Hill hosted by the late Filipino-Canadian Senator Tobias Enverga Jr.

This span of time was enough for me to tell his honest and humble deliberation of his duties that time as Philippine Cabinet Secretary. In Newcastle during the meet and greet, Leoncio "Jun" Evasco Jr. sat in the church receiving area where he gladly shook hands and mingle with ordinary Filipinos who came to meet him. He was like a father, soft spoken, very reserved and receptive of the other person's words and ideas. A man, who orchestrated the candidacy of president DU30 and won his presidency. It was this man who draw DU30's climb to power in the highest possession in the country.

A man of principles and love of ordinary people. A priest who relinquished religious life to fight for justice of those who were oppressed and jailed for it. This multifaceted life surely made him human, honest and fair. His honesty, passion and love for people is a remarkable trait of a leader whose purpose is to serve.

Why would Boholanos not put him to lead them for a better future? Honesty and dedication are trademarks a voter shouldn't miss.

I remember my father when he won as our town's councilor under an opposition party. During municipal meetings and sessions, my father's job was to opposed what the Administration put on the table. Strangely, my father  didn't and eventually became an ally to the winning party.

How did it happened? Because my father wore his heart on his sleeves. He will not opposed anything good for the people. His partisan loyalty wasn't there as he believed his job was to make people's lives better. And yes, he procured a cemetery for the resting place of his fellow WWII Veterans during his tenure as Councilor of our town. Service to the people must come first and must be pulled from the heart, something that Boholanos can do in this coming provincial election.

Vote for Leoncio "Jun" Evasco Jr. as the next Governor of Bohol and then you choose the man who can usher Bohol into a new era. It doesn't matter which party you belong. The betterment of life does not come from being partisan. Choose the right Candidate to lead Bohol to a progressive province where honesty, dedication and burning service to people of Bohol that can only emanate from the man who understands integrity and service to his people.

VOTE for a remarkable candidate as your future Governor of Bohol; LEONCIO EVASCO JR. 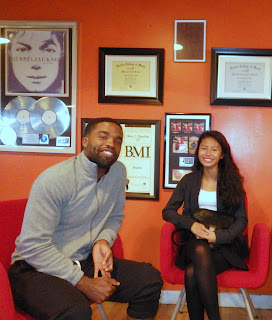 Roy Hamilton III- Multi-Platinum Producer/Music Mentor with Fien Mendoza Eight months did I knew Fienness Mendoza and since then, we have been walking together on her journey to find her niche in music. It was me who suggested that she'd join Talent Nation in Hamilton, Ontario so she could gained more knowledge and polished her gift of singing that could lead her to a more professional footing as a young artist. What is good about Fienness is her ability to understand what it is that she needed to do based on the wisdom of those who cared for her. So off she goes with Talent Nation where she received invaluable trainings from music mentors through bootcamps and the opportunity given for live performances. While Talent Nation was ongoing, Fienness was also recording her cover songs at a professional recording studios in Whitby where the owner is also an artist (multi-awarded) best known as a world class guitarist, Juan Coronado. From the confinements of his studio, this